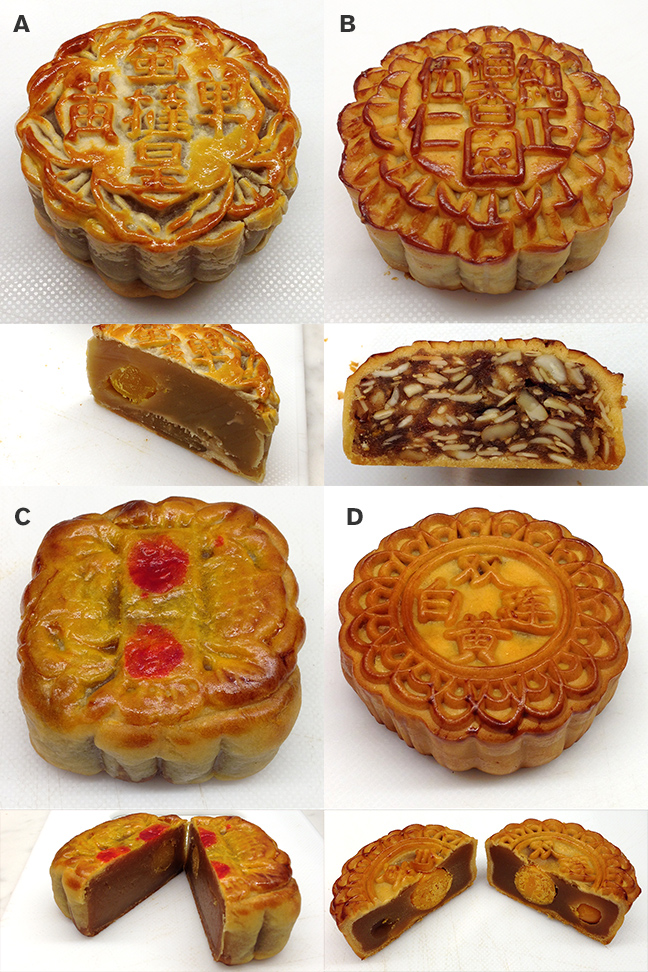 Yesterday, on my way home, I saw a Chinese lady carrying four bags of mooncakes and realized that it is now the season for them; Mid-Autumn Festival, which is apparently today (September 30) according to Wikipedia. From what I read on the Web, mooncakes are so labor-intensive that most people do not bother making them at home. I asked several of my Chinese friends and they told me to get the ones sold in a box at Chinese supermarkets. Last night, I went back out to Chinatown to look for them. A teacher at my daughter’s school told me that Fuxiangyuan is a good brand to get, so I went to about a dozen different bakeries and supermarkets to find it. I finally found it at New York Mart at 128 Mott Street. I was so excited to find it that I didn’t pay attention to the flavor indicated on the side of the box, and I ended up getting a mixed nuts version (Photo B: $20 per box of 4), which is not the traditional kind. On the way back home, I also bought one from Natalie Bakery on Grand Street at Forsyth (Photo A: $5 each). They make their own.

This morning, another friend told me to go to Golden Fung Wong Bakery Shop on Mott Street at Pell Street. They too make their own mooncakes and they have many different kinds. I got the traditional one with lotus seed paste and egg yolks (photo C: $4 each). I went back to New York Mart to get the traditional kind but it was already sold out. In fact, I noticed that everyone sold out of all the imported mooncakes with lotus seed paste and egg yolks. The only ones I could find were ones with untraditional flavors, ones made elsewhere like Malaysia, or ones made by local bakeries. The expensive ones sold out first.

My family happened to go near Flushing, Queens today, so we went to Hong Kong Supermarket on Main Street. When we got there, there were still about a dozen boxes available (Photo D: $11 per box of 4). As I was inspecting it, they were flying off the shelf, and by the time we left, they were all gone.

Since I’m not familiar with the flavors of lotus seed paste and salted duck eggs, I can’t judge which one was the best, but I personally preferred the one from Golden Fung Wong (Photo C). I liked the saltiness of the egg yolk combined with the sweetness of the lotus seed paste. These should be eaten with a cup of tea. It’s essentially a way to sweeten the tea without actually putting sugar in the tea. As you can see from the photos, the imported ones look the best. I saw many other house-made ones, and none of them looked as good as the imported ones.

On the Web, I found mooncakes made by Starbucks. They look/sound great. I’d love to try them. And, apparently Häagen-Dazs makes mooncake ice cream.

I’ve never heard of him before but this is an interesting story. By the way, the pronunciation of Aoki is wrong in this video. The “A” should not be “ei”, just “a”. (But maybe Richard Aoki himself pronounced it that way.) 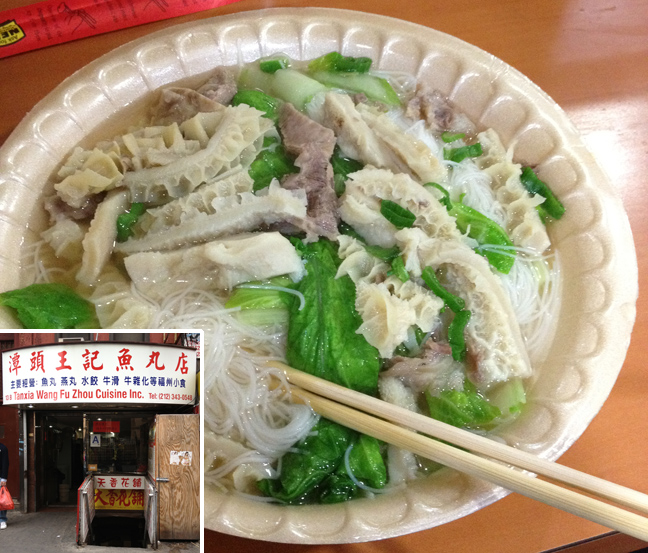 This is beef tripe noodle soup from Tanxia Wang Fuzhou Cuisine at 13 Eldridge Street, New York. Only $3. I liked it. The place was packed at 5pm. Their dumplings looked good; I’ll try them next time. 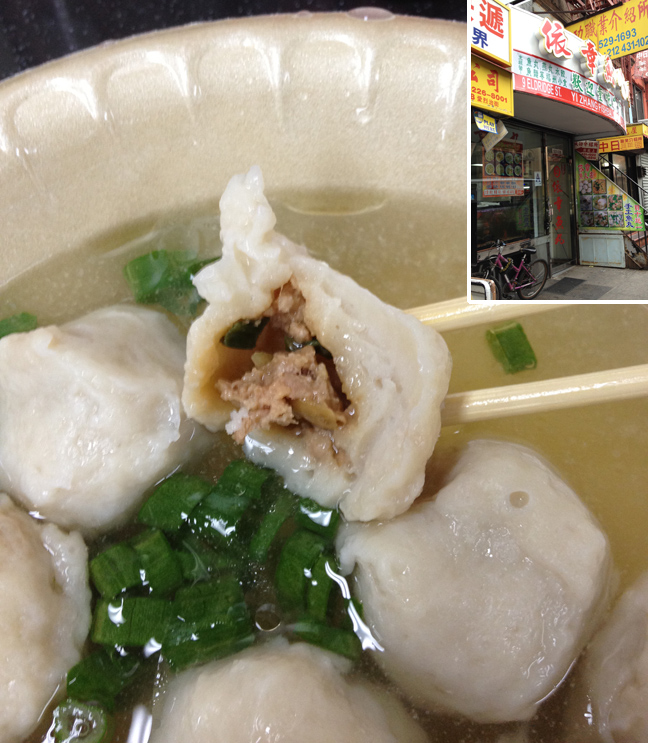 This is from Yi Zhang Fishball at 9 Eldridge Street. It’s really tasty. I wasn’t expecting to see anything inside, but this is fish and some sort of meat (probably pork). It’s only $3

Why Do Americans Still Think MSG Is Bad for You? 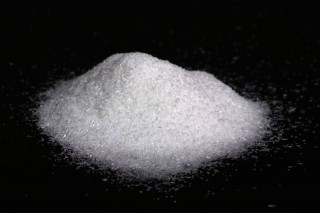 Why do so many Americans, even very well-educated ones, still believe that MSG is bad for our health? It is an urban myth that it causes allergic reactions. Many studies from around the world have proven that MSG is no more harmful to our health than plain salt, yet the urban myth in the US continues. (Read Wikipedia entry on MSG ») In fact, in large quantities, salt is more harmful to our health than MSG is. When restaurants don’t use MSG, they just put more salt which is worse. I think it’s just because the name “monosodium glutamate” sounds too scary. If we called salt by its chemical name, I think the same thing would happen: “Would you like some sodium chloride on your French fries?”

Some people feel lethargic after eating Chinese food which lead to this myth called “Chinese Restaurant Syndrome”. I believe this has to do with the heaviness of the food. I feel the same way whenever I eat rich, heavy, greasy food. Cheap food in general tends to be so, specially cheap Chinese, Indian, and deep-fried food. If you were to stuff yourself with rich French food loaded with butter, cream, and cheese, the same would probably happen but because French food is generally expensive, we don’t stuff ourselves with it. And, that leads to another argument that enhancing the flavors with MSG would be good for us because we would feel more satisfied with less calories.

The main reason why the urban myth of “Chinese Restaurant Syndrome” spread so fast and wide, I believe, is xenophobia. Chinese food was a perfect candidate for it. MSG is strongly associated with Chinese food but it was actually invented in Japan, and the Japanese people probably consume more MSG than the Chinese.

MSG first went into production in 1909 in Japan, and since then, the Japanese people have been using it in just about everything. It’s nearly impossible to avoid MSG in Japan, or even in Japanese grocery stores in the US. You pick up any food product randomly and look at the list of ingredients, you will find MSG. For over a century, the entire nation of Japan has been consuming MSG every day. But, as it is commonly known, the Japanese are significantly healthier and live longer than Americans. So, what is there to be concerned about? More than one generation of people have already consumed it all their lives. Cutting down on sodium consumption is a common health concern even in Japan, but I’ve never heard anyone talking about cutting down on MSG.

It is true that using MSG in everything you cook is a form of cheating, but the same is true for salt and sugar. When you eat fruit, say strawberries or a grapefruit, you would want it to be naturally sweet, and not have to add sugar to it artificially. The same is true for savory food. You want to enjoy the natural amount of salt that’s in the ingredients, and if you get high-quality ingredients full of natural flavors, you wouldn’t need to add salt. We tend to add salt to food when flavor is lacking. High-end restaurants don’t usually have salt on the table, and asking for more salt is considered an insult. In that sense, yes, adding MSG is a form of cheating; we should enjoy the naturally occurring MSG if possible. But why single out MSG as a form of cheating? If MSG is cheating, then chefs should not add any salt or sugar in any of their food either, but they all habitually do. So, it’s hypocritical to single out use of MSG as cheating. 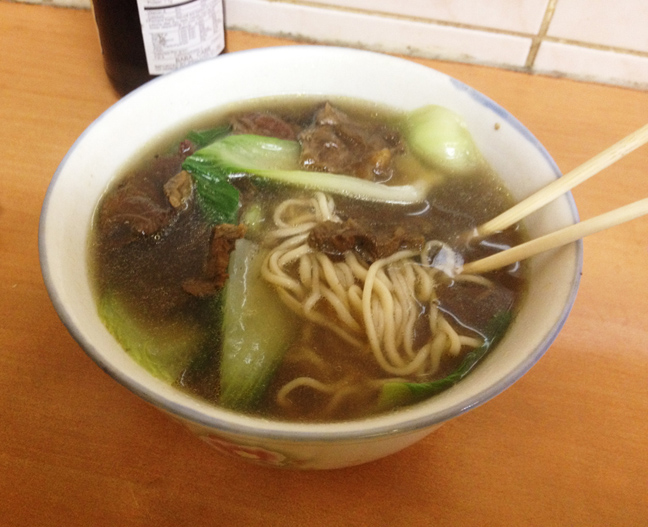 I used to think Japanese ramen noodles were superior to the original Chinese versions, but now that I started tasting a variety of Chinese noodle soups, I think the Chinese ones are better. I think the Japanese put too many things into their broth. It’s too rich. It’s somewhat ironic that there is a “Ramen” fad in New York right now, popularized by the famous Korean-American chef, David Chang. 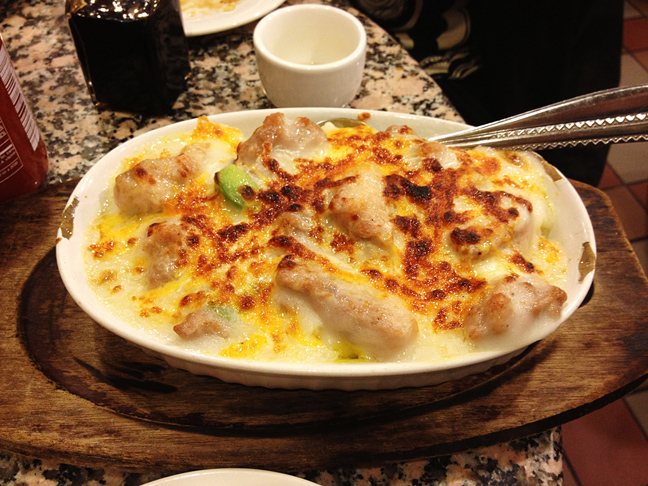 This is what I would call yellow trash food. It’s chicken and cheese over rice. It tastes amazing. I loved this. Check it out at Xo Kitchen, 148 Hester St, New York 10013, (Between Elizabeth St & Bowery)