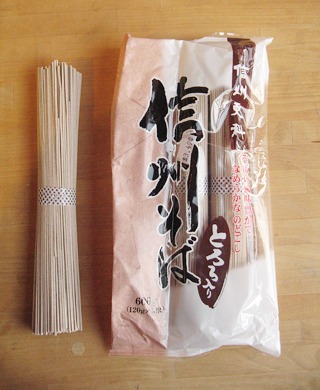 Soba noodles are relatively popular in New York, but unfortunately the brand you find most commonly is Roland Organic Soba Noodles. My wife is American, and she’s never even been to Japan, but even she can tell the obvious difference between Roland’s Soba noodles and any Japanese soba noodles you can find in a Japanese grocery store.

Roland’s noodles are spineless. They are mushy no matter how you cook it. So, avoid it. You can buy pretty much any brand of soba noodles at a Japanese grocery store. (If the store is owned by a Japanese person, they would not carry Roland’s. If they do, the owner should commit suicide.) One pictured to the right is just one of many. To be honest, I don’t think I would be able to tell the difference from one brand to another. But some are flavored. My daughter likes the one with umeboshi (pickled plum) flavor because it’s pink. You can also get green tea soba noodle too. Some are equivalent to linguini; thickly cut. I like them too.

All you have to do is to cook it like pasta, but you drain and cool it under running cold water. During the summer time, I even serve it with ice cubes mixed in. You then prepare a small bowl with dipping sauce (here is an example of soba noodle dipping sauce). You may have to dilute it with water. I usually mix some wasabi in it. You then take a small amount of the noodle with your chopsticks and dip it in the sauce.